Home » ERP Blog » News and Events » Ultra State of the Economy Update: Volatility is the Watchword

Ultra State of the Economy Update: Volatility is the Watchword

Our team of  independent ERP consultants understands that the state of the economy impacts the business decisions project teams make about modernization requirements.

Consequently, Ultra takes a concerted interest in world economic affairs, with a special focus on the U.S. Manufacturing and Distribution Industry.

March: Spring is in the Air

Financial markets have been quite volatile over the past few weeks. Fortunately, however, the global manufacturing sector continues to be healthy. In February, all of the top-20 markets for U.S.-manufactured goods expanded, illustrating the strength of the international economy once again.

In addition, the J.P. Morgan Global Manufacturing PMI edged down from 54.4 in January to 54.2 in February, and it remained just shy of December’s pace, which represented the fastest pace since February 2011. New orders, output and exports were somewhat softer in February but still quite positive. Hiring growth was not far from the December reading, which—like the headline index—was the best since early 2011. Manufacturing leaders remain very upbeat in their global outlook for the next six months, with the measure for future output at a three-year high.

The U.S. dollar has trended higher over the past few weeks, up 1.9 percent since January 25. The trade-weighted U.S. dollar index against major currencies from the Federal Reserve Board has risen from 84.6338 on January 25—its lowest level since December 18, 2014—to 86.2256 on March 2.

This index reflects currency units per U.S. dollar, suggesting that the dollar can now purchase somewhat more than it could before. With that said, one of the most significant stories last year was the depreciating U.S. dollar. Since the end of 2016, it has declined 9.9 percent against major currencies.

The IHS Markit Eurozone Manufacturing PMI has fallen from 60.6 in December—its best reading since the survey began in June 1997—to 59.6 in January to 58.6 in February. Although that was a four-month low, the data remain consistent with strong growth overall for European manufacturers. 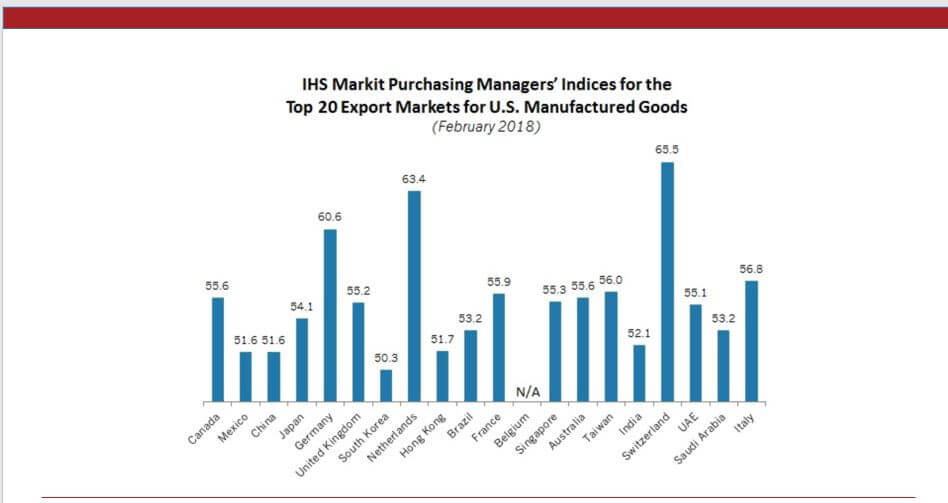 The Caixin China General Manufacturing PMI inched up from 51.5 in January to 51.6 in February. New orders and future output accelerated in February, but other measures slowed somewhat while remaining very modest, including output and exports.

Net hiring has contracted every month since October 2013, and that measure showed a decline that picked up in February.

Other recipients of the Trump tariffs have threatened to tax significant U.S. exports as well, and the possibility of a trade war now looms although no actions have been taken thus far.

Similarly, retail spending declined 0.8 percent in December, but Canadians spent a whopping 6.7 percent more over the past 12 months.

A Look at the Manufacturing Sector

Manufacturing—which had fared better for much of the past year—was off 0.1 percent year-over-year in December, down from 2.5 percent in November and 5.0 percent in May. Meanwhile, the unemployment rate ticked up to 3.4 percent in January, up from 3.1 percent in December, the lowest rate since December 2007.

In the U.S. the labor market has tightened significantly as a result of strength in the manufacturing sector and larger macroeconomy 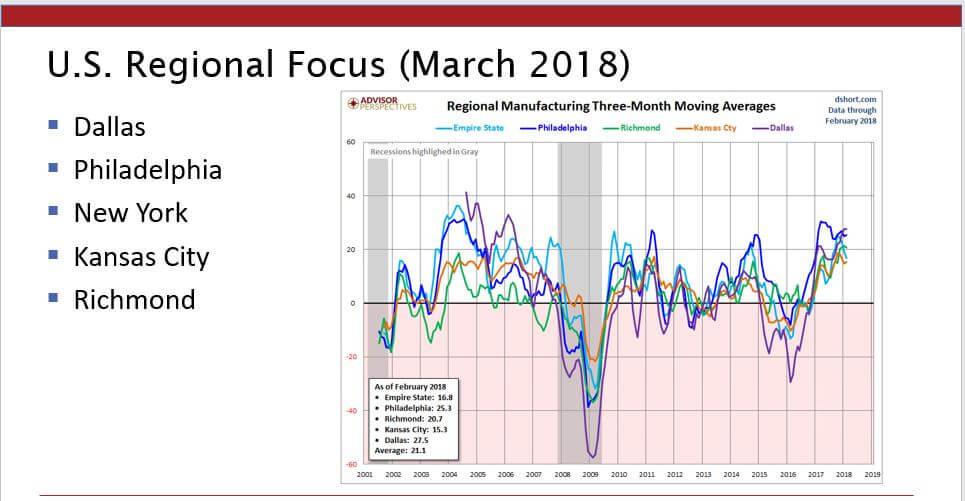 For instance, there were 427,000 manufacturing job openings in January, up strongly from 374,000 in December.

The manufacturing sector hired 360,000 workers in January, just shy of the 364,000 employees hired in August, which was the strongest rate since November 2007.

Positive economic news—especially in the jobs market—has helped to lift consumer confidence. The Index of Consumer Sentiment from the University of Michigan and Thomson Reuters jumped to 102.0 in March, the highest level since January 2004.

It should be noted that those individuals with higher incomes felt less upbeat in the most recent survey—likely from volatility in equity markets and the impact that has on personal finances—but that was not enough to drag down the headline index.

Despite robust consumer assessments about the economy, retail spending declined 0.1 percent in February for the third straight month, starting the new year off on a disappointing note. Motor vehicle and parts sales fell 0.9 percent in February, decreasing for the fourth consecutive month and one of the larger drags in the latest report.

Along those lines, retail spending excluding automobiles increased 0.2 percent in February. Nonetheless, the larger narrative remains encouraging, with consumers being a bright spot over the past year.

Small and medium sized businesses have clear priorities for the year – customer retention, expansion into new markets, business process improvements, innovation, and workforce development, and those are the areas where they are willing to invest in technology to help. Not surprisingly, their spending is highly correlated with firm size.

About 1 in 3 report spending more than $100,000 annually, with the remainder spending a lesser amount. Forty-percent of SMBs acknowledge their investment level in technology is lower than it should be.

According to Gartner, small/medium sized businesses account for about 44% of IT spending globally. The companies’ opinions of the perceived ROI they get from technology vary. Perceptions of ROI roughly follow a bell-shaped curve. In the aggregate, 6 in 10 rate the ROI of the technology in use at their firm as good or excellent.

On the other hand, the tech industry itself is focusing in on new ideas that don’t yet have clear applications to the business world. According to Gartner, top trends for the tech industry are as follows, and the faster companies can integrate these abilities into their businesses, the more ahead of the development curve they will be:

Ultra’s Take: Volatility is the Watchword

International markets were volatile again this month, but most continue to show steady progress. U.S. based portfolios had mixed performances in the past period proving that markets are at best, mixed.

Consumer goods, industrial goods, and the housing markets were the areas hit the hardest by unpredictable market results in the past month.

The Eurozone had an uncharacteristic slowdown in growth this past month, with only a few countries experiencing multi-year highs and countries like Germany experiencing a slight downturn.

On the other hand, although China’s numbers were more mixed this month, it continues to demonstrate unwavering growth consistency, even in the face of volatility.

U.S. regional indexes were all positive but growth slowed down significantly in most regions besides the east coast. 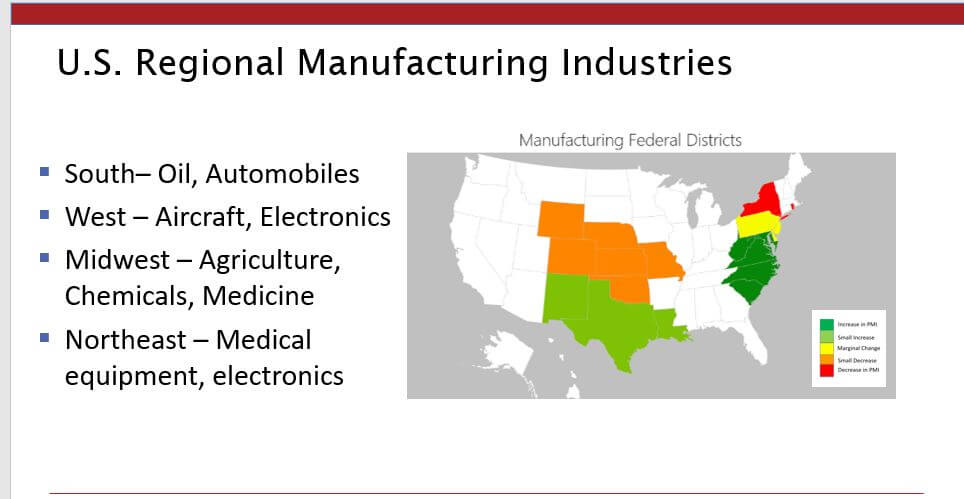 On February 28, the Office of the USTR released the Trump administration’s 2018 Trade Policy Agenda and 2017 Annual Report. This is an annual review required by statute. The policy agenda contains five major elements:

Although these initiatives may seem admirable for the U.S. at the outset, thus far, the moves made towards accomplishing these goals have only destabilized markets and created conflict for the U.S. with other countries in the commerce sphere.

If agreements aren’t reached, especially regarding the major trade deals, U.S. producers may end up being hurt rather than helped by these projects.

Leading economies are exhibiting slower, mixed growth, and markets have proven to be unstable in the last two periods.

The U.S. markets have been similarly undermined following uncertain trade policies affecting U.S. manufacturers heavily. Stable growth may still be in store for 2018, but it doesn’t look like it’s coming down the pike any time soon.

Will these economic activities impact your organization? Contact Ultra to gain further insight.